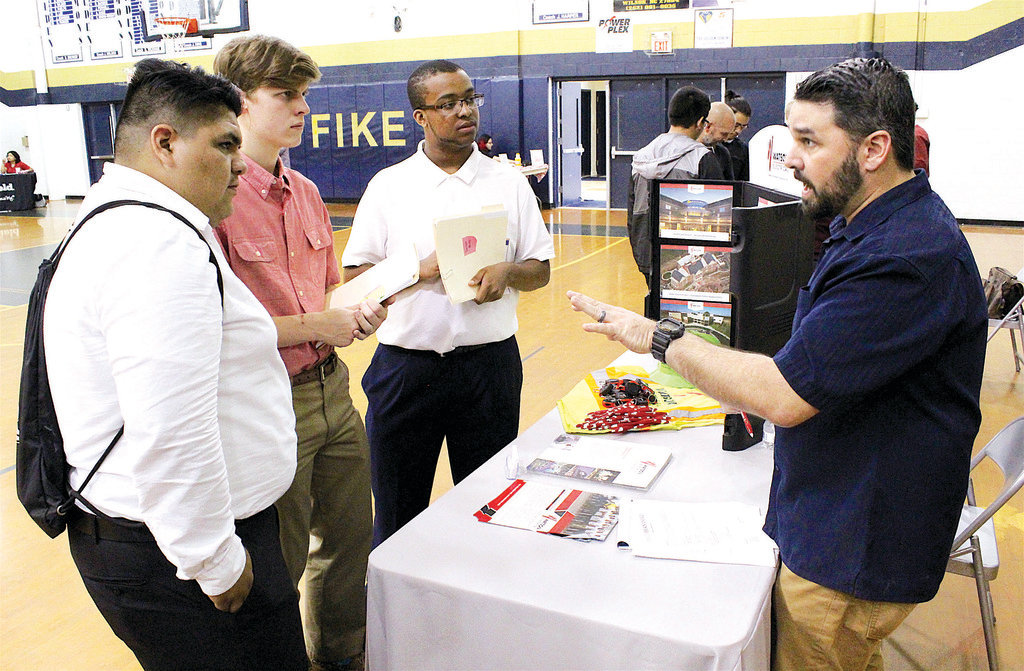 Posted at 18:50h in News by Wilson Education Partnership

For Perla Villarreal-Zapata, a Hunt High School senior, the Senior Job Fair organized by the Wilson Education Partnership was a chance to find an interesting career.

More than 100 students had the chance to become familiar with 18 Wilson-area employers at the fair held Tuesday at the Fike High School gymnasium.

Perla was drawn to Refresco, the world’s largest independent bottler for retailers.

Perla said the job fair helped her get closer to deciding what she wanted to do after graduating from high school. She said it gave students who might be going to a community college a chance to see what Wilson offers.

“We are trying to target students that don’t have any plans after graduation, and we also reached out to seniors at the last minute who may know where they are going, but they still need to know we have great jobs and they may move back here,” Williams said.

“We have several seniors that are probably undecided about their future and exactly what they want to do,” Lucas said. “Some of these students might not be necessarily thinking about a four-year or two-year college, so we’ve got some opportunity here.”

Seniors from all three traditional high schools and Wilson Early College Academy were eligible to participate.

Will Webb, industrial engineer with Wilson’s 3C Store Fixtures Inc., graduated from Wilson Christian Academy in 2003 and went straight to work at 3C.

Webb started in maintenance, then worked in the various assembly departments, in the supply room and worked his way up through project management to the position he has now.

“With this being a local company, we want to get people involved who are the local younger kids, and they can hopefully work their way up through the ranks as well,” Webb said. “If they have got the attitude and the drive to work, we feel like we can teach them the trades and the skills to be successful.”

Eric Emde, a recruiter with Watson Electrical, said the company is trying to get the word out to graduating seniors that there are options beyond college.

“There are employers out here willing and waiting to invest in their future, particularly in our case through our apprenticeship program where you earn while you learn; you partner with your employer. We invest in them. We send them through a four-year, paid apprenticeship. They learn their skill both in the classroom and out in the field under our guidance, under our trainers and also in a local tech school.”

Emde said within the company’s senior and mid-level and executive ranks at Watson, there are lots of employees who started work right after high school.

“They were 17 years old, and somebody handed them a shovel,” Emde said. “The next thing you know, they are operations manager or they are a vice president.”

Logan Butts, a recruiting coordinator with S.T. Wooten Corp., said the company loves getting students right out of high school.

Carey McKeithan, human resources manager for Smithfield Foods, said the company’s bacon production facility in Wilson is the largest of its kind in the nation with more than 600 employees.

McKeithan said the company hires young people right out of high school and trains them. The company offers free tuition reimbursement for employees after 90 days on the job.

Saulo Jose Rodriguez, a Fike senior, was attracted to the Conestoga plant because he’s been making wood cabinets for two years.

Rodriguez said the job fair was a good idea.

“For those that don’t have a plan, it’s something to open up and find a new job, something they might find a passion for and let them grow later on and maybe find a career,” Rodriguez said.