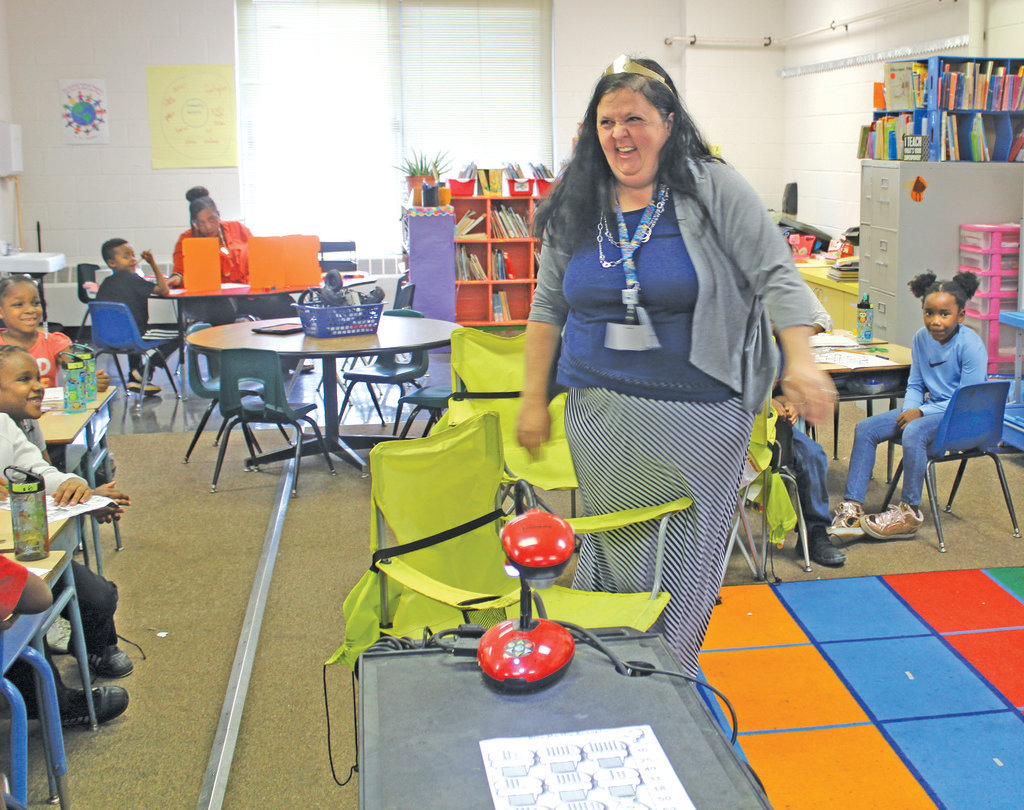 Posted at 14:39h in News by Wilson Education Partnership

“I do this superhero happy teacher dance,” said Howell, who teaches first-grade. “And I’m about to go dance.”

Howell was one of 23 Wilson County Schools teachers who received education grants from the Wilson Education Partnership. The WEP handed out $14,000 in mini-grants to elementary, middle and high school teachers over a two-day period.

Howell’s $160 grant award will be used to create science, technology, engineering and mathematics bins for her students.

Those bins will be filled with different items that foster growth in STEM areas in a fun way.

Howell’s students were overwhelmed with joy, too, seeing their teacher receive an oversize replica check from the WEP.

“I am beyond the moon grateful,” Howell said.

Howell, a first-year teacher, said the WEP is there to support and foster learning.

“It was clear to me they were here to support student growth,” she said.

And Howell did just what she said she was going do after the check presentation — she danced.

WEP Executive Director Robin Williams said the entire process of giving out mini-grants on Wednesday and Thursday was a joy for all involved.

“It’s all about the teachers and the students,” Williams said. “We just want to make a big impact.

We want to surprise them. We want them to know we are out there working in the community for them to make their job better.”

Williams said the Wilson Education Partnership is trying to create a great environment for teachers to do what they do best — teach.

“Our whole platform is letting the community know we need to build a strong network for teachers and offer them support,” she said. “That way we can recruit the best and only have the best. You have to be there for them and let them know they are a vital part of the whole economy of our community.”

Williams said Merck donated $4,000 to fund some of the STEM grants across the school district. Williams said some of the grants this year benefit multiple schools. Another grant awarded to an exceptional children teacher will benefit all schools.

Applications were submitted and grants were awarded after a committee chose the winners.

• Frederick Douglas Elementary received $950 grant for a “Let’s Break Out of the City” project proposal from Sabra Green.

• Wilson Early College Academy received a $954 grant for a “Breaking Out with Breakout EDU” project proposal from Shannon Campbell.

• Winstead Elementary received a $760.02 grant for a Winstead STEM project proposal from the school’s fourth-grade teachers.

• Darden Middle School received a $334 grant for a “Showcasing Our Artists” project proposal from Melissa Butts.

• Lucama Elementary received $298.57 for a “Movement in the Music Room” project proposal from Jana Winders.

• All schools’ exceptional children programs received $932.41 for a “PE for Me” project proposal from Amy Stadiem.

Story and Photo By Olivia Neeley