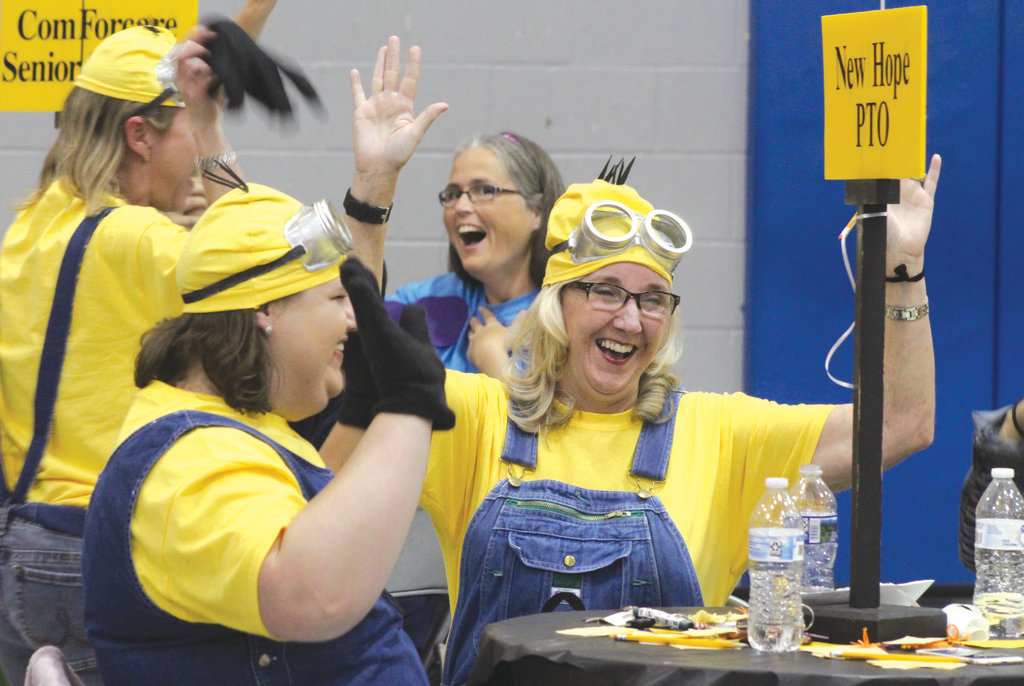 Posted at 14:28h in News by Wilson Education Partnership

After dawdling with minor word spellings like mastodon, solarium and sibilant, Team Breen was resolute not to be torn asunder by the challenge of a skimpy little word like thesmothete.

Team members Rhyan Breen, Paula Michalak, Elizabeth Winstead and Chris Beneck were durable enough to win the Wilson Education Partnership Adult Spelling Bee Tuesday at Hunt High School. They were also animated enough to receive the award for being the most spirited.

Breen is an attorney with Farris & Farris and a candidate for the Wilson County Board of Education’s District 7 seat.

“It went great and better than expected,” Williams said. “We had four or five new tables and two had never been before, so that was great. Every school was represented, which is wonderful.”

Most of the 44 teams dressed to suit the event’s Monster Mash theme.

Holly Smith, a third-grade teacher from Lee Woodard Elementary, had a giant eye affixed to her forehead and played the role of the cyclops. Her team was filled with mythological creatures

“We’re just mythological creatures,” Smith said. “It’s an easy way to raise money and it’s a good way to get out and have some fun. We raise it fast and it’s for a good cause.”

Mandy Matthews, a third-grade teacher from New Hope Elementary, was dressed along with other team members as “Despicable Me” minions.

“This is my first time,” Mathews said. “It’s a lot of fun. It’s for a good cause. It’s going to support a lot of folks who need it.”

Her team won the prize for bringing the best costumes.

Second place in the spelling bee went to Bridgestone and third went to Wilson Medical Center.

This is the biggest fundraiser of the year for the Wilson Education Partnership.

“It shows the excitement that people have to help the schools in the community and that makes me happy,” Williams said.

What makes the event successful is the participation of business partners in the community, like Purdue Pharmaceuticals, which had five tables.

Olga Terrill, a quality assurance at Purdue, was at one of the tables to support the community’s schools.

It was the first time in the competition for Sonja Hayes, a Frederick Douglass Elementary second-grade teacher.

“This is a great way to raise money for the schools and we have a great partnership with these businesses that are doing it,” Hayes said. “The last time I did a spelling bee and I won it was in third grade. That’s a long time ago.”

Lane Mills, superintendent of Wilson County Schools, said the annual bee has a family atmosphere and shows the support the schools have from community partners. “It’s just a lot of fun for a good cause,” Mills said.

“I came out to support the county, to raise funds so the schools and teachers can have the supplies and resources they need to better educate our students,” said Tijuana Locus, a Winstead Elementary fourth-grade teacher.

Belinda Serpico, of Chick-fil-A, said “any cause to help the children of Wilson County is a good cause.”

Cynthia Mitchell, a teacher at the Wilson Academy of Applied Technology, said the bee also gives teachers a chance to participate in an event outside the classroom and enjoy fellowship with one another.

Michael Pardue, a Wilson Early College Academy math teacher, said spelling isn’t his forte, but he came anyway for the fun of it

“I misspelled assassin in the sixth grade and it was ‘assassan.’ I misspelled it. This is my first spelling bee since sixth grade. I’m a math teacher and I can’t spell,” Pardue said. “It’s great to see all of the different companies and organizations that support education in Wilson County. Being a teacher as I am, it’s just great to see community involvement that we have from all levels of Wilson.”