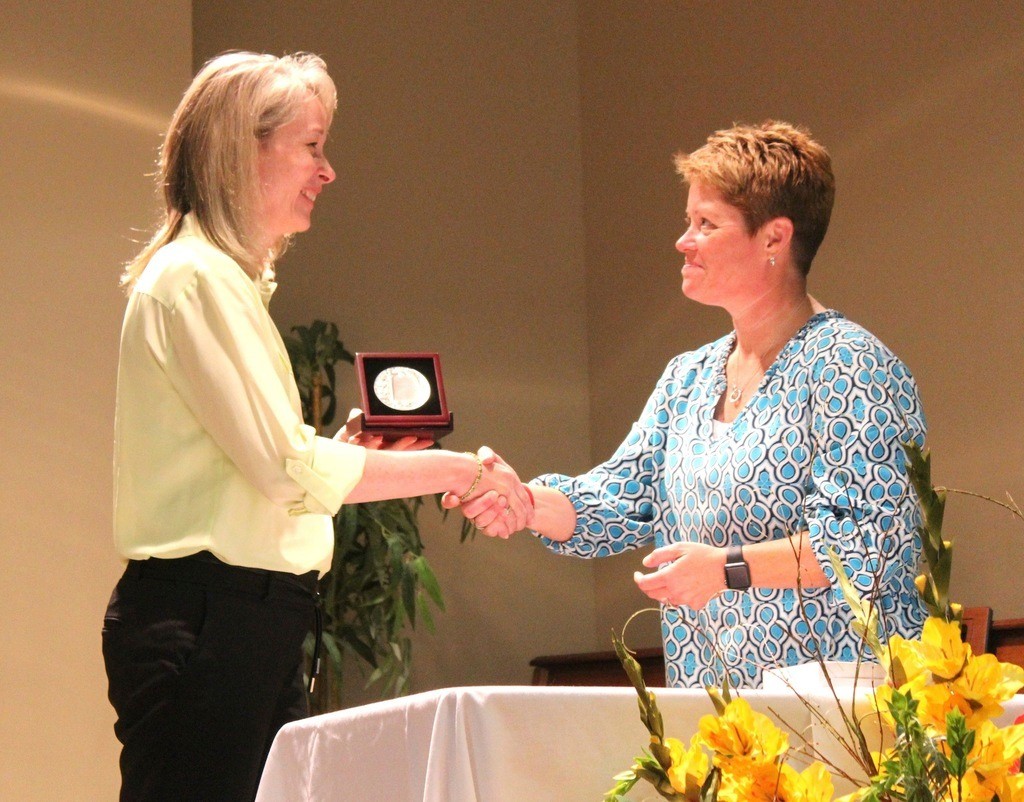 Posted at 12:57h in News by Wilson Education Partnership

Sheryl Creech, president of the Wilson Education Partnership, thanked attendees for their support over the years.

“It takes a village for all of us, for our students and our staff,” Creech said. “We are here to celebrate you and what you have done to empower and support our teachers this year.”

“Our school system is better with your partnerships than we could ever be by ourselves,” said Wilson County Schools Superintendent Lane Mills. “We need your help, your leadership and your hearts. Our students need that. We need that. You make a difference that you may not see all the time for our students, our staff and our community.”

Vick said partners provide all kinds of resources that make a difference in Wilson County Schools.

“They bring their gifts of time, talents and treasures to help our students and teachers do what they do every day,” Vick said. “They provide public and private resources to maximize the collective ability for all of us to prepare future generations to meet the demands of a global workforce.”

“Our partners have become stakeholders in education and they foster children learning hands-on, monetarily, materials and other support,” said New Hope Elementary School teacher Connie Butterfield. “We, as educators, could not function well without the support of our partners. Our partners understand the importance of education and they do all that they can to foster and support that need.”

Davis has been instrumental in the implementation of the district’s wellness initiatives.

“To show her support of our wellness program, Ms. Davis has provided on-site fitness instructors to conduct monthly aerobic classes to staff members free of charge,” Gilmore said. “Ms. Davis and the Wilson YMCA also surprised Hearne Elementary School teacher Jillian Sherman with $700 to support a snack pantry for students in her classroom.”

“He has been such a great and vital partner to our Wilson school system,” said Barnes. “As a part of the Wilson County Schools Safety Impact Team, which was formed in 2013, he assisted with all of the district’s security and safety upgrades which led to Wilson County Schools becoming one of the safest school districts in the state of North Carolina.”

“She made it her mission to contact local businesses and individuals to raise money for the program. Because of her tireless efforts last year, those students were able to attend ‘The Lion King’ performance at the Durham Performing Arts Center and this year, she upped her game. Because of her efforts, she made it possible for these young men to attend the National African-American History Museum of Culture in Washington D.C.”

WEP established this award in 2014 to thank and to recognize those who have made significant contributions to public education in Wilson County. It is the highest award given by WEP.

“The Hunt Award is presented annually to recognize demonstrated, exceptional commitment to public education,” Vick said. “As the highest honor awarded by the Wilson Education Partnership, it is given to recipients that exemplify the vision, leadership and examples of Jim and Carolyn Hunt, to provide the best schools possible and to nurture an array of partnerships that make positive differences for both students and teachers.”

Christy Proctor, the 2016 recipient, presented the 2017 award to Merck.

“Since the Merck facility opened in 1983, the company has been a significant partner to public education and has been a pace-setter that has encouraged other civic engagement in our schools,” said Vick. “Merck has made very large financial investments to support both the work of WEP and to support specific school programs. The largest single gift that WEP has ever received was a $42,000 grant from the Merck Foundation, which we used to expand the Accelerated Reader program in the elementary schools. Merck’s gift generated other corporate gifts so that our total investment in the AR program was over $90,000 in one year.

“Merck more recently chose WEP as the recipient of a Neighbor of Choice Award and that grant we are using to support our college and career readiness initiatives and other things we are doing to support teachers. For several years, Merck employees volunteered in classrooms as mentors working one-on-one with students to improve reading skills and comprehension. Merck leaders also rallied other businesses to send their employees into classrooms to serve as mentors.”

Merck has been a presenting sponsor for the Back-to-School Fair since 2013.

Not only has Merck made a financial investment, its workers have also invested volunteer time. Employees have spent hundreds of hours helping to shop for school supplies and helping distribute backpacks to needy students, Vick said.

“Merck believes in giving back to the community and helping those in need,” Vick said.

Merck made significant contributions to help Gardner Elementary School establish a science learning lab. The company also made it possible for all sixth-graders in the county to visit Imagination Station for a science program.

“Merck understands that schools alone can’t teach our children everything they need to know to become successful employees,” Vick said.

Merck was one of the first companies to offer opportunities for youth apprentices.

“The leaders at Merck have been strong advocates for public education,” Vick said. “They have pushed for important programs to benefit our students. They spoke up on behalf of our schools with elected officials. They encourage financial investments from the community and from the state when we needed improvements in our schools and they rallied other community leaders and businesses to step up for public schools. We are deeply grateful for the contributions that were made by Merck in Wilson County.”

Robin Williams was recognized as the WEP’s incoming executive director. Vick is retiring after more than 20 years leading the organization.

“She has been amazing and definitely has been a legend for all of us to look forward to and grow WEP,” said Creech.